There is simply no denying that Casio G-Shock are the best military watches. They are loved by army personnel and law enforcement officers all over the world. They can withstand the most demanding situations and the harshest weathers and are regarded as the toughest, most durable and best military watches for men in the world.

Every G-Shock watch is designed to take an extreme amount of weight and abuse that would leave most other watches smashed and useless.

The G-Shock is the first watch by any company being able to withstand the challenge.] (Source:Wiki)

After this fun fact, I don’t think that we need any further proof on how well-made and durable the G-Shock watches are!

Besides being tough and hard-wearing, G-Shock watches have some of the common standard features such as:

Some of the high-end G-Shock timepieces come with a Tough Solar feature, which means that the battery can be charged with solar and fluorescent light and after full charging can last up to 9-10 months without being exposed to light. This battery is expected to last almost 10 years and will easily outlast a normal battery. A Tough Solar watch can be a good option if you are planning to be in a remote area with no confirm date of your return. This can save you from the hassle of changing batteries in some unfortunate time and you can be quick on your feet at all times.

The Triple Sensor technology comes with a temperature sensor, an altimeter-barometer and a digital compass. The barometer can demonstrate your altitude and the compass can come in handy when you’re working outdoors and forgot to bring your GPS.

One of the many reasons that Casio G-Shock watches are the best watches for men is due to their Triple G Resistance.

The above-mentioned features will pretty much leave you desiring for your own G-Shock. For this, we have picked some of the best Casio G-Shock military watches according to their popularity, style and value, some of them being equally suitable for wearing with casual clothing as well. This guide will surely help you find the best G-Shock military watch that suits your needs. 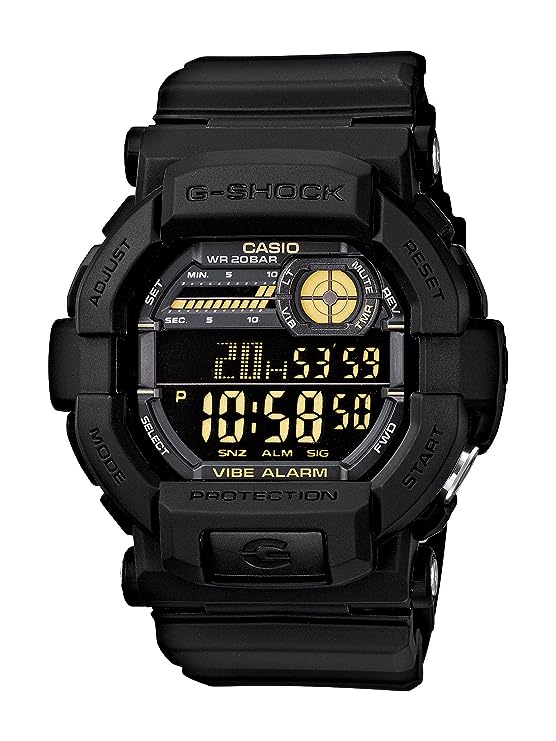 The Casio G-Shock GD350-8 is one the most preferred watches by service members due to its unique features. This watch was specifically designed for military operations. Instead of using an alarm or audible beeps, this watch uses vibration mode for stealth operations. Unlike traditional military watches, the countdown timer can be displayed and initiated without hiding the current time. The countdown timer button and the display of the watch, both are large enough to be easily visible in any condition.

It has a made-for-action look and a rugged design, compliable with any military dress code. Military members need to punctual and attentive at all times. This watch features 5 daily alarms including 1 snooze alarm and a battery that can last up to 5 years and comes with a low battery warning sign. The G-Shock GD350-8 is surely one of the best digital watches for men.

Our readers love this watch, it is also one of our hot selling item. 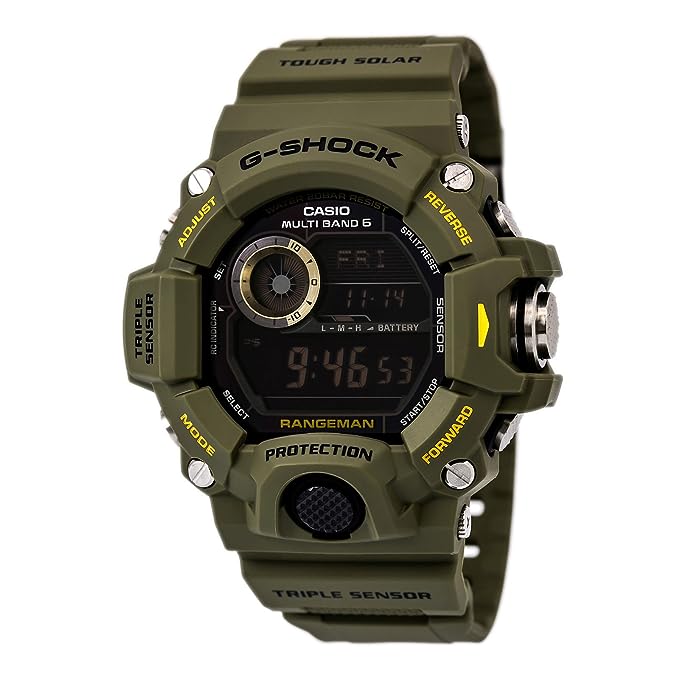 This watch comes in an appealing, classic green design that resembles some of the military uniforms and looks quite classy on an army officer. With its rugged design and practical engineering, this watch is one of the best suited timepieces to wear under harsh situations and extreme weather. With its Shock Resistant Triple Sensor, you can keep altitude, temperature, direction interpretations, and atmospheric pressure at your fingertips.

Some of the other features include multi-band 6 atomic timekeeping, solar powered rechargeable battery, entailing sunrise/sunset data, one-touch elapsed time measurement, and one-touch time recording. There is an auto backlight which can be turned on by just tilting your wrist. NOW THAT IS SOME COOL MILITARY WATCH STUFF!

There is a pretty good video about this watch: 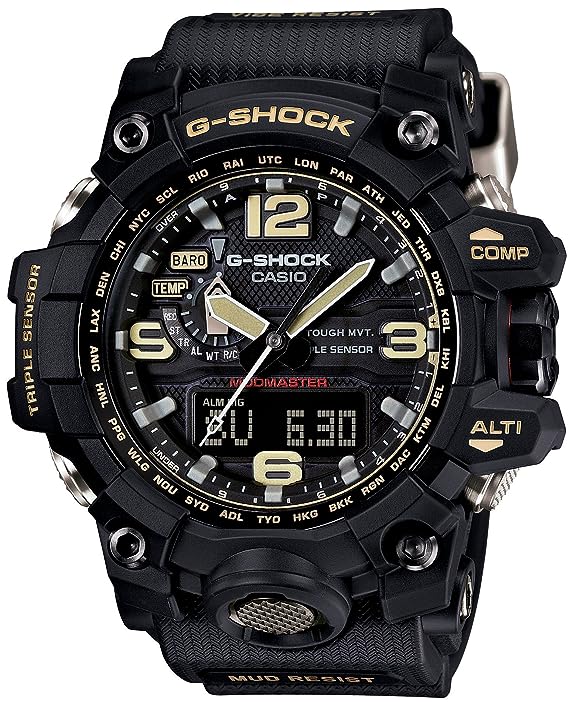 The G-Shock GWG-100-1A8 features mud-resistant and is one of the few G-Shock watches with a Neon Illuminator, a blacklight LED that makes the watch hands and marker glow vibrantly in the dark. This makes the GWG-100-1A8 a perfect choice for working under dark environments and muddy terrains. Moreover, the Neon Illuminator comes with a second Super Illuminator LED light for the LCD display which can be set to automatically activate in the dark with a turn of the wrist.

It also features Tough Solar power and Multi-Band 6 radio time calibration for maintenance-free operation and movement, but it lacks the Triple Sensor and a front light button of the original design. 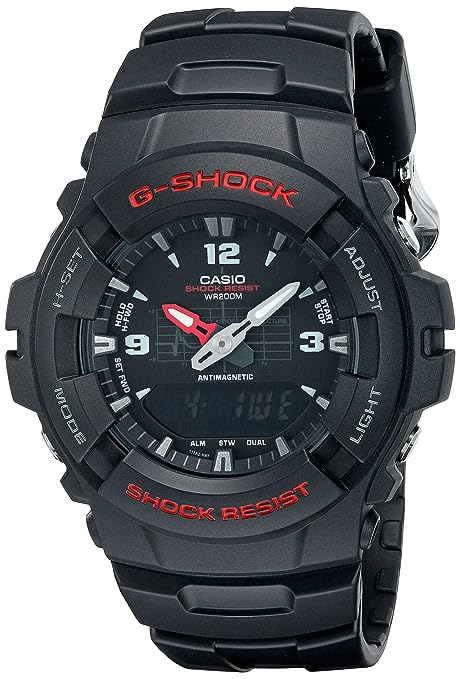 G-Shock G100-1BV is the perfect choice for those who prefer a conservative and well-built analog watch over any fancy made timepiece. It is a tough-looking, durable watch with thick straps that are soft and fit comfortably on your wrist. This watch may look heavy due to its built and design but is actually very light-weight and won’t weigh down your wrist. Other features of the watch include magnetic resistance, 1 daily alarm, stopwatch, auto calendar and a battery that lasts up to 3 years. 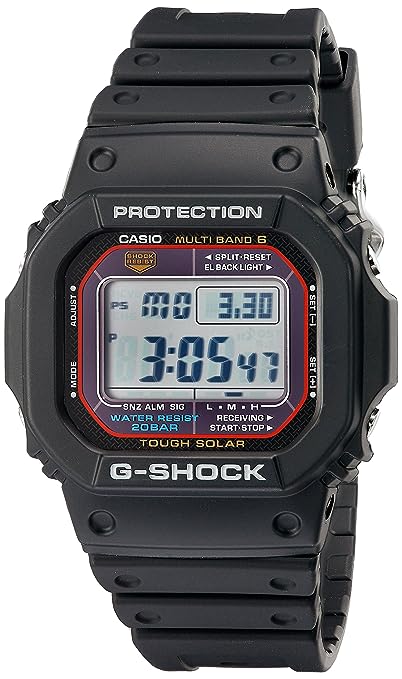 This classic G-Shock has slim and sleek profile and is based on the first G-Shock model ever made in 1983. The watch is retro, but many advanced features are added to it such as Tough Solar power, Multi-Band 6 timekeeping, and world time. Its 200 meters water resistance makes it a good choice for professional marine activity It is one of the thinnest G-Shocks and can be worn under long sleeve uniforms without the watch coming in your way. The G-Shock GWM5601-1 has a clean yet strong built and offers versatility, so it will look good with any military as well as casual apparel. It is a good option to consider if you’re not a fan of huge watches and rather get a standard sized watch. 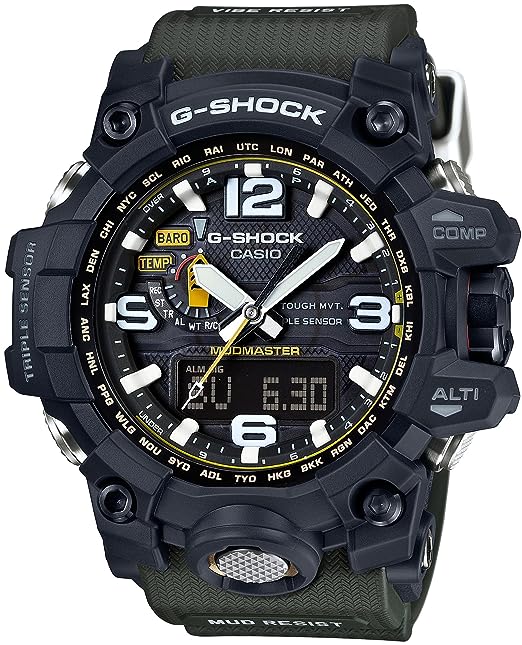 The GWG-1000-1A3 Mudmaster was launched in the market in 2015 and since then, became the most highly anticipated new model after the Rangeman. At 59.5 × 56.1 × 18.0 mm, it’s one of the largest G-Shock watches and is considered to be one of the Casio’s higher-end analog G-Shock watches. Its design looks like the hybrid of Rangeman in an analog G-Shock. It features the Rangeman’s guarded button structure and its sturdy design is resistant to dust and dirt. This watch also offers resistance to extreme vibration for its analog movement.

Other important features include Triple Sensor that comprises of an altimeter, barometer, compass, and thermometer, Tough Solar power, Multi-Band 6 radio wave timekeeping, and a sapphire crystal glass for protecting the watch against scratches. This watch is a pretty great option for people who are not a fan of a digital timepiece. 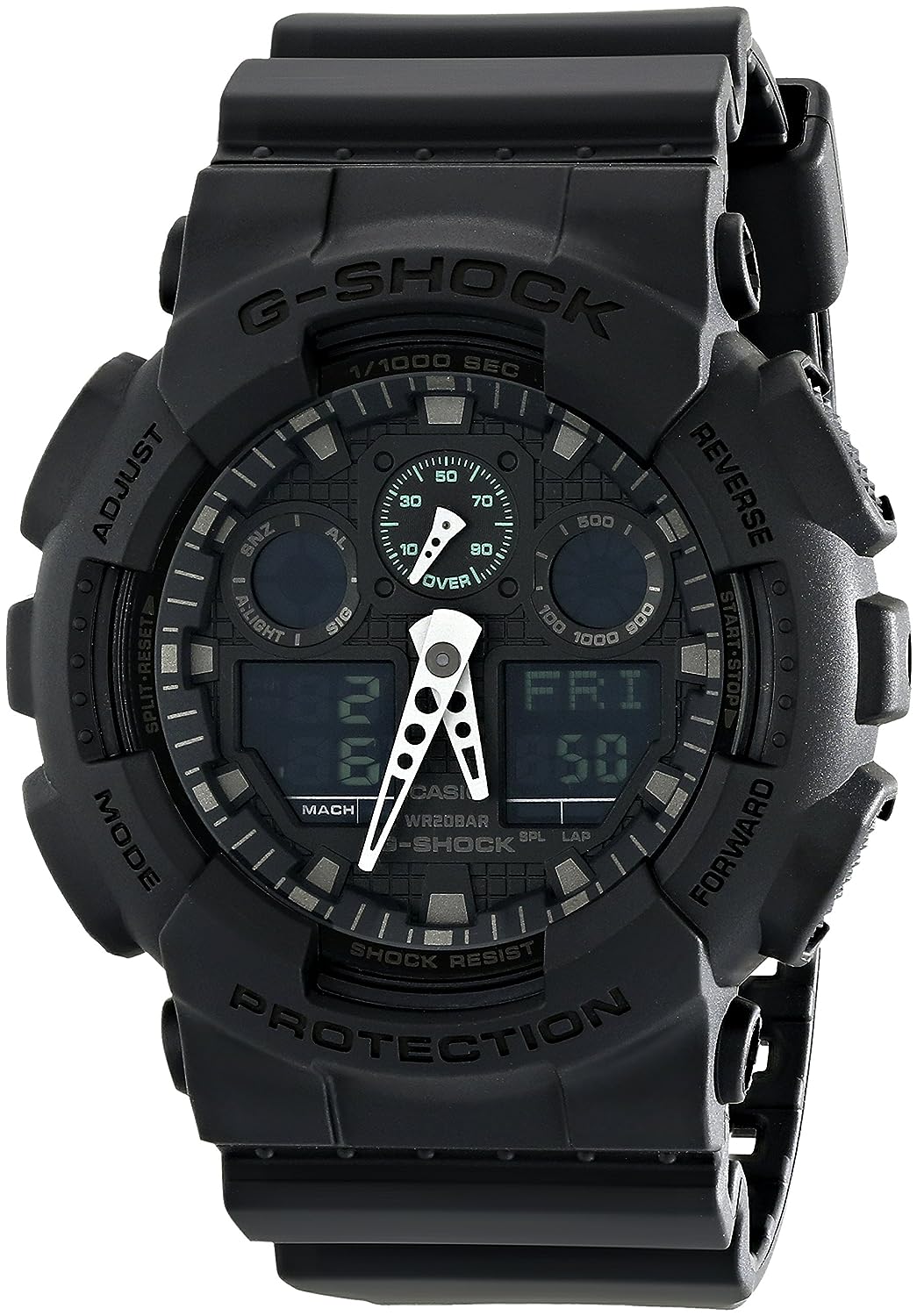 This matte black military inspired timepiece will make you feel confident and stylish just like 007. The GA100MB-1A has a 100% shock proof and magnetic resistance, a 1/1000 stopwatch, 200 meters water resistance and a speed measurement function that will calculate your speed measured over a certain distance with accuracy. It also has LCD sub-displays to display the time, date and its digital functions. It is a super tough watch with a unique and edgy design that is loved equally by army personnel, law enforcement and police officers. 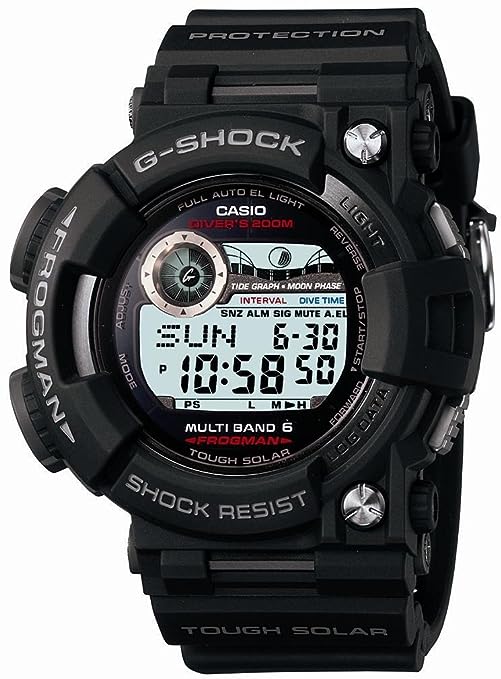 The G-Shock Frogman is one of the most popular and most beloved classical G-Shock watches that dates back to 1993. If you’re a hardcore G-Shock fan and want something conventional and premium, then this is the watch to get. This the only G-Shock with ISO 6425 water resistance to 200 meters and a dive time and surface interval measurement function that makes it one of the best watches for Navy personnel and scuba diving lovers. Other exclusive features of this watch include Tough Solar, Multi-Band 6 and tide and moon phase graphs. It comes in a full stainless steel inner case unlike other G-Shocks. 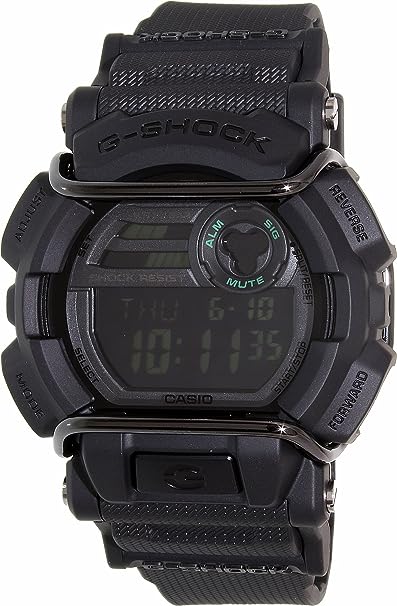 This G-Shock GD400MB-1 comes with a “bull bar” wire that acts a face protector providing extreme resistance to shock and impact. The green-tinted reverse LCD display and all-black body gives the classic look of early Casio men’s watches. Some other features of this watch are an adjustable flash alert with LED light and beeper for the alarms, hourly time signal, and countdown timer, multi-time function that will display the time for 4 different cities and a low battery warning. If you’re looking for an extremely rugged watch and great shock resistance, then the GD400MB-1 is one of the best digital watches that you can get your hands on. 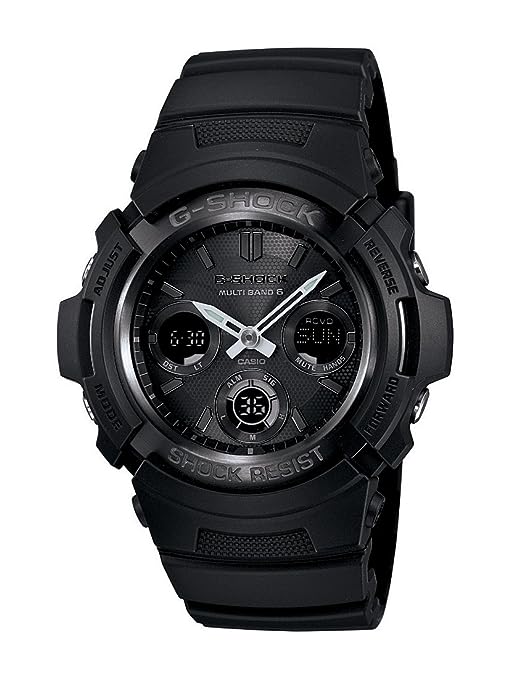 The AWGM100B-1A is a simple all black watch with a well-built design that comes with Tough Solar, Multi-Band 6 technologies and white analog hands for easy display. This is a good choice for basic time telling and worry-free movement.

With this, our list of the best Casio G-Shock military watches comes to an end. Choosing between the best G-Shock watches was very tough as every G-Shock has its own pros and cons and all of them are considered to be among the best watches in the world.

So, what are you waiting for? Did you decide from our list that which G-Shock you’re going to get? If not, then hurry up! Get your hands on some of the best military watches to add elegance and class to your attire.

Lastly, don’t forget to checkout our article about the Best G-Shock Watches For Police Officers under $100